I've started designing a wireless interface using Bluetooth that, for technical reasons, requires the endpoints to communicate at a nonstandard baud rate. I found these neat-o Bluetooth-to-serial adapters on the net [look around, this is not the cheapest place, don't pay more than $8 USD or so for them and be sure to verify they have the HC-03 or HC-05 firmware that supports master -and- slave modes] that have a convenient AT-command set interface for configuration, so you can pair them up without any in-depth knowledge of Bluetooth, and a transparent mode that then acts like the modems of old... but they only support the standard rates you see with COM ports on PCs (9600/19200/38400 and so on). Bummer.

So.. it seemed to me that it should be possible to add a controller that, depending on the communication direction (this is a unidirectional link), would do an up- or down-conversion by sitting in between the BT interface and the target endpoint.

No hardware UART I've heard of supports a split data rate on the Tx and Rx lines, so a hardware UART or USART was not in the running. Software UART implementations from Atmel's app notes only do half-duplex while this required something that could shuffle data both ways in order to do the rate conversion.

For full-duplex software UARTs there is a handy library out there which includes one -- the Procyon AVRlib -- but it was written for AVR mega MCUs, and didn't have any facility for asymmetric baud rates. My application only needed a few pins so I wanted to use the ATTiny which has a somewhat different interrupt and timer register set as compared to the ATmega series. Moreover, the ATTiny25/45/85 have two independent hardware timers -- it looked perfectly feasible to implement a software UART that had asymmetric baud rates on the Tx and Rx sides, so why not roll my own software UART. Shouldn't be too hard, right?

and (for the other side)

As long as your endpoints [A] and [B] use a lower bitrate than whatever the Bluetooth-to-serial modules are configured for while in transparent mode, no special buffering of serial data should be required as [A] and [B] limit the total end-to-end bitrate to that of [A] and [B] themselves.

It took a bit of head-scratching with the oscilloscope attached but I managed to get a full-duplex software UART going on the ATTiny85, with no external hardware required. Symmetric or dual-bitrates are supported. I've tested the symmetric config at 38400 using puTTY and a USB-to-serial interface and all looks good so far. No real reason why the split rate shouldn't work, as each of Tx and Rx use their own unique timer...


I'll post code as soon as I have a spare moment.. gotta eat lunch now :p

I Make Stuff! Stuff You Need!

Most non-trivial software projects that do rapid releases use a build automation server. One of the most popular solutions for this is Jenki... 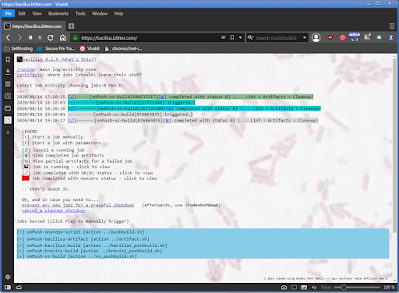 DangerRuss
<-- Dabbler in much, master of nothing.